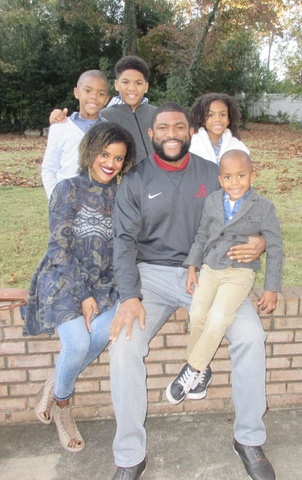 A graduate of Birmingham’s Huffman High School, he would go on to play safety and linebacker at the University of Alabama – Birmingham, where in a bible study targeting athletes, Scotty would commit his life to Christ.

Following graduation from UAB Scotty would join the staff of Campus Outreach Ministries in pursuit of his passion to “Build laborers and leaders on the campus for the lost world.”

Scotty would engage in campus ministry with athletes while serving as team chaplain at Tuskegee University (2000-03), UAB (2004-07), Alabama State (2007-08) and in 2009 he joined the FCA Staff at the University of Alabama. In each of these venues, the lingering impact of Scotty’s ministry, can be seen in the leaders he has equipped, empowered, and who are now serving Christ through leadership in their families, churches, campuses, and some are engaged in full-time ministry.

Scotty now serves as the Executive Director for Blueprint Tuscaloosa and is primarily seeking to Equip and empower students at the University of Alabama to become leaders who transform the under-resourced communities in Tuscaloosa by investing in urban youth.

In February 2005 Scotty made the most significant decision he would ever make apart from the day he placed his faith in Christ as his Lord and Savior, when he took Sylvia Austin as his bride. Together they have four children: Scotty Jr. “Champ” (11), Jonathan (10) Scotty’s 8 year old princess Olivia and the newest addition is Baby Austin (4)!